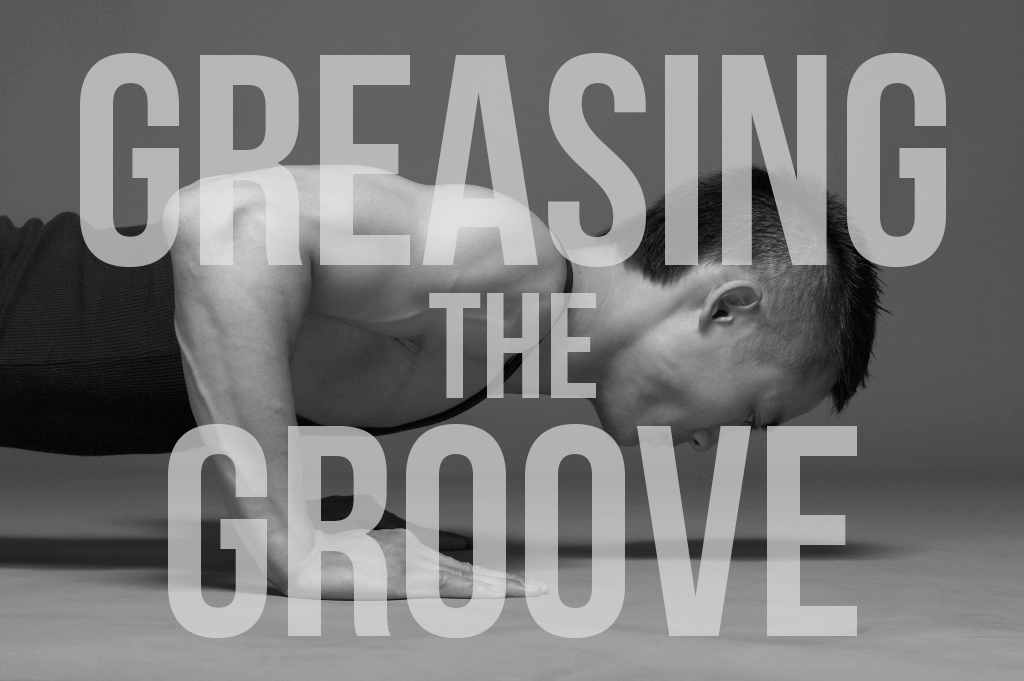 The 100 Pushups training plan is based on a training principle called Greasing the Groove.

The following is a faithful reproduction of an article that was almost lost to the annals of time. It was written by the notorious Soviet strength coach Pavel Tsatsouline who revolutionized the approach to strength training forever, and coined the term 'greasing the groove'.

Our communist enemies, who are trying to bury us, have exercise breaks instead of coffee breaks.

Grease The Groove For Strength

by Pavel Tsatsouline, Master of Sports

Your grandmother used to tell you: to get good at something, you must do it often, do it a lot, and do it to the exclusion of other things. Yet you never listened, why you little..! If you did, how would you ever get the bright idea of deadlifting once every two weeks and doing ten assistance exercises for the bench press?

It is so obvious, most people dont get it. Once I came across a question posted on a popular powerlifting website by a young Marine: how should he train to be able to do more chin-ups. I was amused when I read the arcane and non-specific advice the trooper had received: straight-arm pull-downs, reverse curls, avoiding the negative part of the chin-up every third workout.

I had a radical thought:

If you want to get good at chin-ups, why not try to do, a lot of chin-ups?

Just a couple of months earlier I had put my father-in-law Roger Antonson, incidentally an ex-Marine, on a program which required him to do an easy five chins every time he went down to his basement. Each day he would total between twenty-five and a hundred chin-ups hardly breaking a sweat. Every month or so Roger would take a few days off and then test himself.

Before you knew it, the old leatherneck could knock off twenty consecutive chins, more than he could do forty years ago during his service with the few good men!

A few months later Roger sold his house and moved to an apartment. A paranoid Stalinist that I am, I suspected that he plotted to work around the chin every time you go to the basement clause.

By the degree of the Politbureau Comrade Antonson was issued one of those Door Gym pull-up bars. Roger wisely conceded to the will of the Party and carried on with his “grease the chin-up groove” program. Roger Ivanovichs next objective is a one-arm chin. He just does not know it yet.

My father, a Soviet Army officer, had me follow an identical routine in my early testosterone years. My parents apartment had a built in storage space above the kitchen door (it is a Russian design, you wouldn’t understand). Every time I left the kitchen I would hang on to the ledge and crank out as many fingertip pull-ups as I could without struggle. Consequently, high school pull-up tests were a breeze.

Both Roger and I got stronger through the process of synaptic facilitation.

Neurogeeks never got around to telling iron heads that repetitive and reasonably intense stimulation of a motoneuron increases the strength of its synaptic connections and may even form new synapses.

Translated in English it means that multiple repetitions of a bench press will “grease up” this powerlifts groove. More “juice” will reach the muscle when you are benching your max. The muscle will contract harder and you will have a new PR to brag about. Four times powerlifting world record holder Dr. Judd Biasiotto set up a bench in his kitchen, got in the habit of hitting it every time he was in the area and put up a 319BP @ 132!

Obviously, you do not have to be a Commie weightlifter with Rocky IV pharmacy to benefit from high volume heavy training. Here is how you can to set up a “grease the groove” program for one rep max strength or for strength endurance in your dungeon:

The science of motor learning explains that an extreme, all out movement is operated by a program different from that used for the identical task performed at a moderate intensity. As far as your nervous system is concerned, throwing a football for maximum distance is a totally different ball game than passing it ten yards, no pun intended.

According to Russian scientist Matveyev (yeah, the chap who invented periodization), you must train with at least 80% 1RM weights if you intend to make a noticeable impact on your max.

According to Prof. Verkhoshansky, another mad scientist from the Empire of Evil, for elite athletes this minimal load is even higher - 85% 1RM. Yet many comrades will be very successful greasing the groove with 60-80% weights as long they emphasize the competitive technique -high tension, Power Breathing, etc.

Naturally, if you are training for strength endurance rather than absolute strength, you should train with lighter loads. To meet the Soviet Special Forces pull-up standard of eighteen consecutive dead hang reps stick to your bodyweight plus heavy regulation boots.

It is critical for the programs success that you avoid muscle failure as aerobic classes and rice cakes.

Do not come even close to failure, whether you train for max or repetitions!

A triple with a five-rep max or ten pull-ups if twenty is your PR will do the trick. The secret to this workout is performing a lot of work with reasonably heavy weights. Pushing to exhaustion will burn out your neuromuscular system and force you to cut back on the weights or tonnage.

According to former world weight lifting champion Prof. Arkady Vorobyev, one to six reps are optimal for training of high caliber weightlifters and increasing this number hinders strength development. Or, as Luke Iams put it, Anything over six reps is bodybuilding.

Do more reps, and your body will think that you are practicing a totally different lift.

Dr. Biasiotto who once squatted an unreal 605 @ 130 has switched to bodybuilding and knocks off 325×25 these days. His legs are no longer a pair of pliers in shorts as they used to be in his days of heavy triples and world records, but he would be the first one to tell you that there is no way he could put up a massive single training this way.

Of course, for bodyweight pull-ups, push-ups, and other commando feats of staying power you will need to bump up the reps to satisfy the law of specificity. Roger Antonson worked up to training sets of nine by the time he set a personal record of twenty chin-ups.

Vitaly Regulyan, one of the top Russian benchers, does fifty to seventy heavy sets per lift! What are YOU waiting for A permission from Mike Mentzer? Up the volume!

“High volume” does NOT mean a lot of reps with Barbie weights. Such training is good or nothing but a muscle pumpers virtual muscle. Do I sound like Anthony Dittillo? Good, the man is right, give him a cigar! “High volume” on the synaptic facilitation power plan means maximizing your weekly tonnage with heavy weights.

Make sure that volume does not come at the expense of intensity. Average intensity is calculated by dividing the poundage by the total number of lifts: 85,000 : 200 = 425 pounds. Intensity can be expressed in pounds or % 1RM. In the above example 425 pounds is 82,5% of 500 pounds one rep max; the intensity is on the money.

The strong man must make an effort to gradually build up both the volume and the intensity while making sure his body can handle the load and does not overtrain. Trite as it sounds, listen to your body.

Prof. Vladimir Zatsiorsky, a Soviet strength expert who jump shipped from the Dark Side of the Force to America, summed up effective strength building as training as often as possible while being as fresh as possible.

An eighties study by Gillam found that increasing training frequency up to five days a week improved the results in the bench press, something big Jim Williams knew a decade earlier when he benched in the neighbourhood of 700.

Ditto for Dr. Judd. Before Biasiotto took up benching in the midst of his kitchen appliances, he had worked out in his training partners spider web insulated and rat infested garage where he benched five times a week for fifteen heavy sets within an hour. That brutally efficient routine boosted skinny Judds bench from 140 to 295 pounds in nine months!

Russian strength researchers discovered that fragmentation of the training volume into smaller units is very effective for promoting strength adaptation, especially in the nervous system. In other words, one set of five every day is better than five sets of five every five days.

It is even better if you chop up your daily workload into multiple sessions. Motor learning comrades know that while the total number of trials is important, the frequency of practice is even more critical than the total volume. Paul Anderson had it all figured out when he supersetted heavy triples in the squat with gallons of milk throughout the day. If you can swing it -all the power to you, people!

Concentrate your gains on the snatch and the C&J, SQ-BP-DL, or any other few select lifts and forget assistance work!

The synaptic facilitation approach is very powerful because it greases the specific groove of your pet feat. Additional exercises will just distract you from your purpose. I plan to expand on the cloudy issue of specificity of strength in a future article. For now, be a good Communist and show some blind faith!

The synaptic facilitation power plan can be summed up as lifting heavy weights as often as possible while staying fresh as a cucumber (Russkies have a thing against daisies, you wouldn’t understand). Contrary to what some snobby pantywaists believe, this heavy, high volume approach is not an iron fossil but one of the most scientific approaches to strength training there is.

Chain yourself to the squat rack and call me in a year. Words to live by.

The 100 Pushups Training Plan is built from the ground up to incorporate elements of Pavel's Greasing The Groove. Pavel's article articulates some of the reasoning behind the training you are doing.

Here's a related article: The Life-Changing Habit of Daily Pushups.